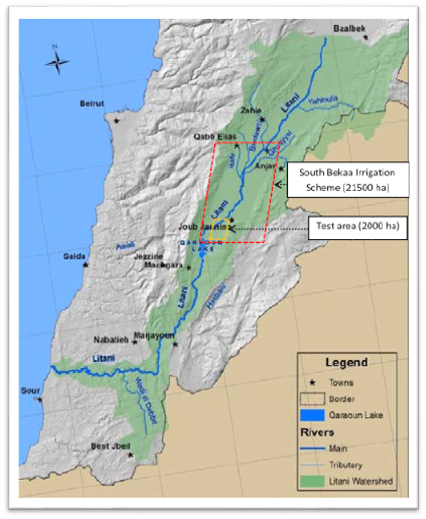 Lebanon test site is located in South Bekaa Valley and is a part of South Bekaa Irrigation Scheme (SBIS), the one irrigable area is 21,500 ha nearly. For economic constraints, only a pilot area of 2,000 ha is for the time being equipped with a pressurized irrigation network, while the rest of the scheme is still relying on ground wells for irrigation purposes.

The test site is characterized by a Mediterranean semi-arid climate, hot and dry from May to September, and cold and wet extending for the rest of the year. Average seasonal rainfall is 650 mm, with 95% of the rain recorded from October to May and only 5% in April-May, shows a great annual and monthly variability. Average annual potential evapotranspiration is 1,185 mm, justifying the need for irrigation during late spring and summer periods. Temperature is strongly seasonal, with frequent frost periods in winter time that markedly limit vegetation development. Soils are characterized by high clay content and relatively low organic matter. Agricultural land in test site consists of one-third of wheat and other winter cereals, mainly barley, one-third of potato, winter legumes and summer vegetables and one third of fruit trees, olive and vineyards and land kept as fallow during the in-between seasons. Winter legumes include broad beans and green beans. Summer vegetables such as watermelon, cucumbers and bell pepper are also cultivated and drip-irrigated using plastic mulch to reduce soil evaporation and control weed growth. Fruit trees include apples and peaches. Sprinkler-irrigated fodder crops, like alfalfa, are cultivated at larger scale in the area to feed intensive livestock system made of small-to-medium size sheep and goats herds.

Results of the Lebanese demo site: