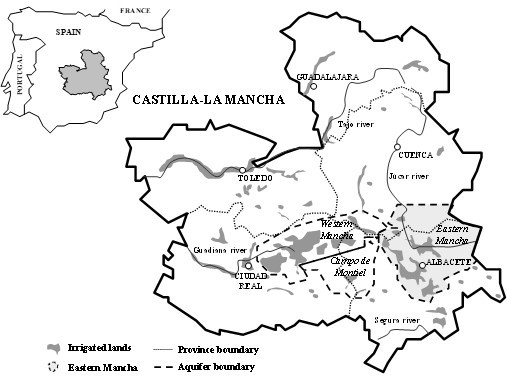 The demo site includes twelve farms located over the Hydrogeological Unit “Eastern Mancha” (HUEM), which occupies an area of 7,260 km2 and supplies water to more than 120,000 ha of irrigated lands. In this area, 95% of irrigation systems are pressurized (mainly sprinkler and surface drip), with an average annual water allocation of 4,000 m3 ha-1. The climate is semiarid, temperate Mediterranean with dry and warm summers. The long-term average annual rainfall is 400 mm mostly concentrated during the spring and fall, and reference evapotranspiration (ETo) is high (> 1,100 mm year-1). Average mean, maximum and minimum temperatures are 13.7, 24.0 and 4.5 ºC, respectively. Soils are classified as Petrocalcic Calcixerepts. Average soil depth is about 40 cm, which is limited by the development of a fragmented petrocalcic horizon. Most irrigated crops are sown between January and May, and rainfed crops are sown between September and November. The most common crops in the area are wine grapes, cereals (mainly barley, wheat and maize), garlic, onion, and other crops such as sunflower and potato. The main crops in the area used for livestock feed are alfalfa, rye grass and forage vetch. The management of the water resources in the area during the last 20 years is carried out by the Central Irrigation Board (Irrigation association), together with the Júcar Hydrographic Confederation and the Regional agricultural government. UCLM participates in this management by supplying remote sensing images to identify the irrigated plots and the cultivated crops, as a way to control the use of water in the area. ITAP is the institution in charge of providing, to farmers, the irrigation requirements reports of the crops through the Irrigation Advisory Service of Albacete.

Results of the Spanish Demo site :